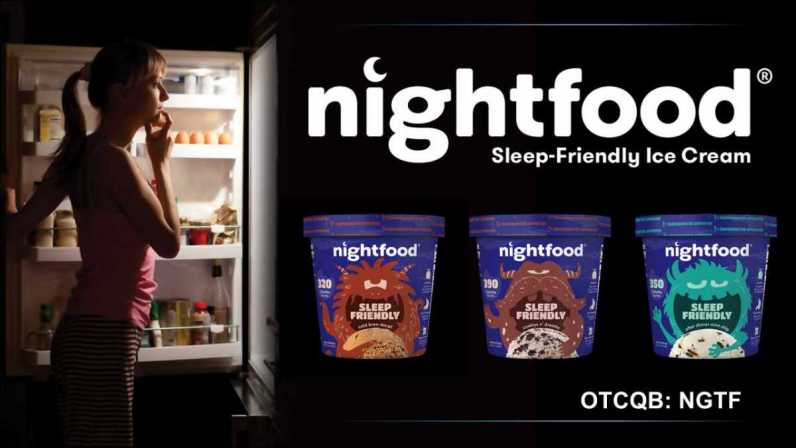 On February 23, 2021, the Company announced it has secured distribution in Walmart starting in Spring of 2021. The number of stores, geographical regions, and flavors selected have not yet been announced.
Nightfood won the 2019 Product of the Year award in the ice cream category in a Kantar survey of over 40,000 consumers. Nightfood was also named Best New Ice Cream in the 2019 World Dairy Innovation Awards.

Nightfood has been endorsed as the Official Ice Cream of the American Pregnancy Association and is the recommended ice cream for pregnant women. There are approximately 3,000,000 pregnant women in the United States at any given time, and ice cream is the single most-widely reported pregnancy craving. With more calcium, magnesium, zinc, prebiotic fiber, and casein protein, less sugar and a lower glycemic profile than regular ice cream, Nightfood has been identified as a better choice for expectant mothers.

Nightfood was formulated by sleep and nutrition experts with ingredients that research suggests can support nighttime relaxation and better sleep quality. Scientific research indicates unhealthy nighttime cravings are driven by human biology. Willpower is also weakest at night, and stress is another contributing factor. A majority of night snackers report feeling both guilty and out-of-control when it comes to their nighttime snacking.

Because unhealthy night snacking is believed to be biologically driven, and not a trend or a fad, management sees significant opportunity in pioneering the category of nighttime-specific snacks for better sleep.

Questions can be directed to:
[email protected]

Management also encourages Nightfood shareholders to connect with the Company via these methods:

There is now a live, interactive Telegram group which interested parties can join to reach team members and discuss Nightfood. Ask questions, learn more about the company and discuss future prospects.
Join the Group

Sign up at ir.nightfood.com, investors can receive updates of filings and news releases in their inbox.
Sign Up Here