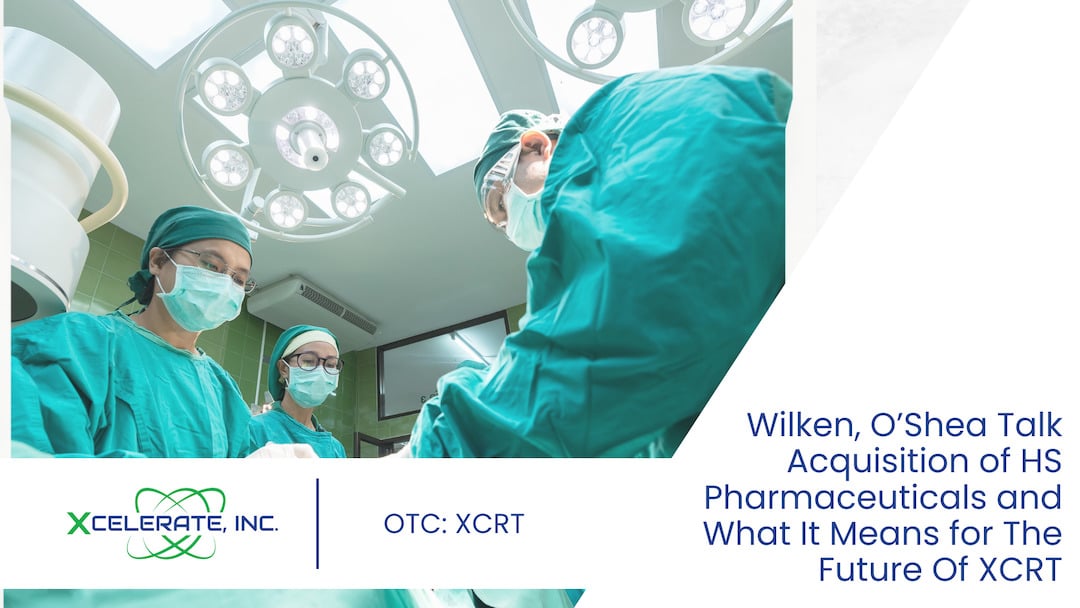 CEO Mike of O’Shea of Xcelerate, Inc., a development stage startup focused on the development of cutting-edge medtech applications, met with SmallCapVoice.com to discuss the recent appointment of a new board member and the acquisition of a rather sizeable patent portfolio.

This acquisition expands upon Xcelerate’s mission of acquiring innovation in the engineering and patent stages of production for further development and commercialization within the medical industry.

O’Shea was joined by Jon Wilken, president and CEO of HS Pharmaceuticals, LLC. They opened up about his new role as an advisory board member for Xcelerate and what has led up to the acquisition to this point.

Wilken spent more than 30 years in the supermarket retail industry before leaving the business in 2002. He also spent more than 10 years teaching entrepreneurial leadership at Clemson University. Venturing into the biopharmaceuticals industry, he then left academia and accepted the role as CEO and president of HS Pharmaceuticals, where he led the charge in the discovery of many early-stage drugs and immunotherapies.

As CEO of HS Pharmaceuticals, Wilken would focus on innovative and breakthrough treatments for chronic wounds and conditions that affect the human body on a molecular level, creating dermatological products for chronic wounds, burns, and drug-resistant infections, as well as patented formulas for some of the most game-changing cosmetics and beauty products on the market.

Throughout the years, the company would also focus on oncology, autoimmune therapies, cancer treatment and bone regeneration for both man and animal – many of which would be developed in collaboration with scientists at the Lakehead and Cambridge Universities.

In a previous press release, O’Shea stated that “HS Pharmaceuticals has been shepherding these patents for the last 10+ years in conjunction with world-renowned scientists and universities, and we are excited to take this amazing intellectual property to the next level.”

“The Board and I welcome Jon,” he continued, “and look forward to collaborating with him on the various projects and, more especially, assisting in assimilating the recently acquired patent portfolio into our business plan. Jon has spent years coordinating the development of these patents and coordinating the efforts of various research scientists and universities.”

For the last 2 years, both companies have been in negotiation, making sure the climate was suitable when merging HS Pharmaceuticals into the fold of Xcelerate and its growing list of revolutionary technologies.

Since announcing that it had signed a purchase agreement to acquire a global portfolio of patents, patents pending, and technology licenses from HS Pharmaceuticals LLC, Xcelerate would go on to add a number of patents and patents pending across the U.S., Canada and Eurasia, which can be found here.

“We’re excited that we’re excited about this relationship with Mike and his team,” states Wilken. “We’re looking forward to our scientists, our research people, our PhDs working with the people that Mike has on board. It’s going to be a great collaboration.”

Xcelerate plans on taking the research conducted by HS Pharmaceuticals and its entire portfolio of patents to the next level. Together, the companies have devised a plan that is expected to become of great interest to major pharmaceutical houses across the industry.