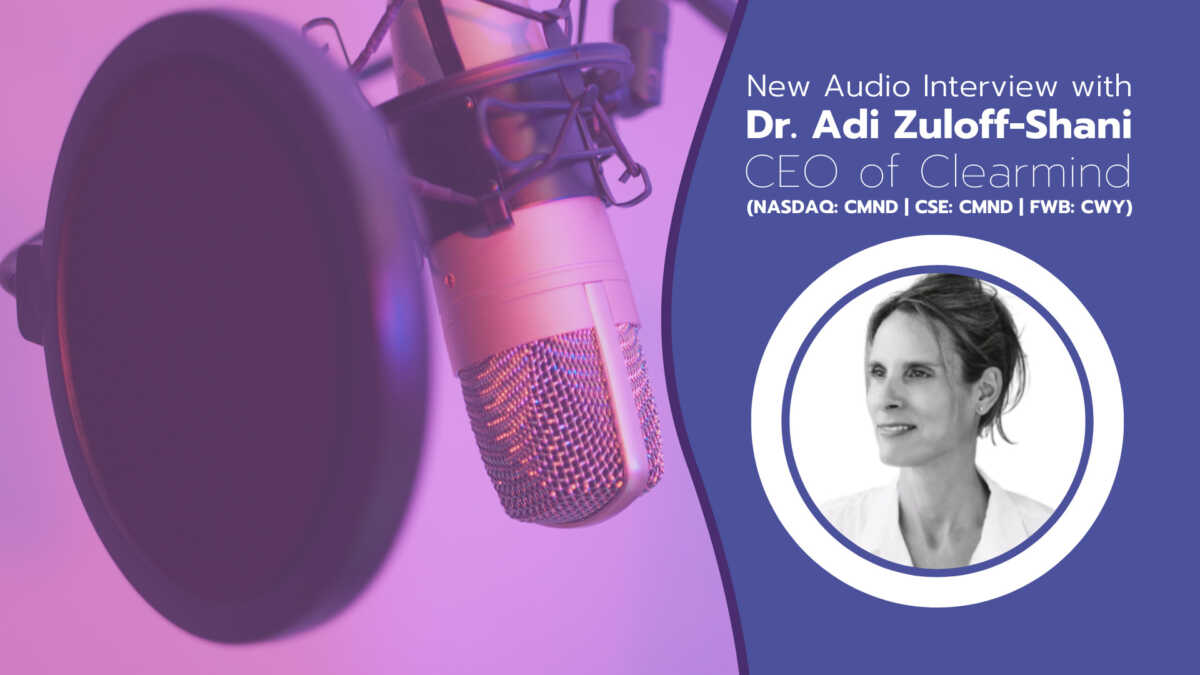 Clearmind’s intellectual portfolio consists of seven patent families. Its lead candidate, CMND-100, is derived from 5-methoxy-2-aminoindane (MEAI), a psychoactive molecule that exerts a euphoric alcohol-like experience and a reduced desire to consume alcohol. CMND-100 is headed for clinical trials in early 2023 as a potential treatment for alcohol-use disorder (AUD), and Clearmind is also exploring the use of its MEAI-based compound to treat cocaine addiction and depression.

Earlier this month, Clearmind was granted a patent from the United States Patent and Trademark Office (USPTO) for the use of its proprietary MEAI as an alcoholic beverage substitute. Speaking with SCV’s Stuart Smith, Dr. Zuloff-Shani explains the global need for such treatment.

“The number of alcoholics is striking,” she says. “We’re talking about millions around the world. Alcohol consumption contributes to 3 million deaths each year globally. It is the third leading, preventable cause of death in the U.S. and the yearly cost is enormous – around $200-$250 billion and that’s in 2010.”

Despite the statistics, Dr. Zuloff-Shani says that existing treatment options in this largely underserved market are largely ineffective. “You would think that a huge problem probably has a lot of treatments to offer,” she explains. “But it’s just the opposite. Since 1950, only three treatments were approved by the FDA. I cannot say that any of them are very effective or have no adverse events associated with it.”

In pre-clinical studies, however, MEAI has demonstrated promising efficacy in individuals who struggle with alcohol, helping to break the addiction cycle. Clearmind’s interest in the component came from the testimonials of people who purchased it to better manage their alcohol consumption.

As Dr. Zuloff-Shani explains in the interview, Clearmind paid attention to those experiences and the company selling the MEAI component online. Convinced of MEIA’s potential as a safe treatment option, it then acquired certain worldwide patents of MEAI used that information as an entry point for its own compound. Now, Clearmind is working on an Investigational New Drug (IND) application with the FDA as it advances toward clinical studies of MEAI next year.

“Usually when you develop a compound, you start from the other direction. You have an idea. You develop a compound and then you go to petri dishes and to animals, and finally you walk that you will have the same signal as, as you had in animals and in petri dishes in humans,” explains Dr. Zuloff-Shani. “Here, we are just doing the reverse process. We understand [MEAI] has the potential to be effective and safe … we decided that we want to do it in a safe place and take the FDA route.”

Smith then shifts the conversation toward Clearmind’s most recent developments and the strength of its management team, staff and scientific advisory board. Dr. Zuloff-Shani describes the structure of Clearmind’s operations and how it benefits corporate objectives and overhead.

“We have a very impressive staff in the company,” says Dr. Zuloff-Shani, who is well-versed in navigating regulatory pathways through her more than 20 years of experience in the biotech and pharmaceutical industries. “We don’t have a lot of people, and this is by choice. We prefer to work in outsourcing because that enables us to manage our expenses better. On the other hand, it allows us to really collaborate in every field that we are dealing with.”

The interview concludes with what Clearmind expects to achieve in the New Year and how it plans to overcome the challenges associated with advancing toward clinical trials.

“The most important milestone we need to hit on 2023 is this IND application … this is really a major event in any company. We expect to have two clinical sites: one in the United States and one in Israel. So, it will be two applications to do different regulatory borders, asking the permission to start clinical trials, and then of course to start a clinical trial,” says Dr. Zuloff-Shani. “And then I hope that you interview me in December next year and I will tell you that we are now at the last stages of the study or reaching completion of the study.”