Clifford first learned about Nightfood after being introduced to their ice cream by his good friend Jordan Jenkins, starting linebacker for the New York Jets. 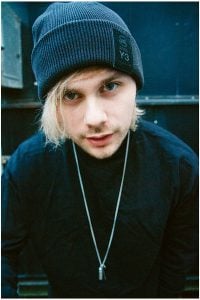 “When Jordan told me about Nightfood, I literally went straight online and ordered 8 different flavors,” explained Clifford. “My fiancé is always trying to help me create better eating habits, and at night I can’t be stopped. This flavor is unbelievable and I can’t wait for people to try it.”

As part of the partnership, Nightfood is developing a custom flavor for the chocolate-loving Clifford, which he will share with his multitude of enthusiastic and dedicated fans via social media. The Nightfood R&D team began work on the flavor weeks ago.

In addition, there are plans for the partnership to include a “golden ticket” type giveaway. To further entice fans to try his new ice cream, Clifford and Nightfood will be giving away prizes and experiences personal to Clifford, to a limited number of lucky winners.

“As quickly as Michael fell in love with Nightfood when he heard about it from Jordan, we expect his fans to be just as enthusiastic to try his limited-edition flavor,” commented Nightfood CEO Sean Folkson. “The opportunity for them to win some special prizes will put this over the top. Most importantly, we’ll be working with Michael to raise money for a charitable cause that means so much to him and his fan base.”

Hailed as the “biggest new rock act in the world” by Rolling Stone Magazine, 5 Seconds of Summer is kicking off a huge 41-city North American tour with The Chainsmokers in Cincinnati ‪on September 25.

“Our goal is to have Michael’s ice cream available for purchase before the start of the fall tour,” added Folkson. “We’re already working on a similar custom-flavor deal with another major celebrity. And, now that this news is out, we expect to work with more celebrities and influencers on their own custom flavors. Over the next few months, investors will see us further inserting the Nightfood brand into pop culture.”

Management believes this partnership, and others like it, will be a tremendous asset in driving consumer demand and revenue as they work towards securing 10,000 points of retail distribution by March 31, 2020.

On Feb 8, 2019, it was announced that Nightfood ice cream won the 2019 Product of the Year award in the ice cream category in a Kantar survey of over 40,000 consumers.

With the overwhelming majority of at-home ice cream consumption occurring in the hours before bed, Nightfood’s sleep-friendly nighttime ice cream, formulated by sleep and nutrition experts, delivers benefits found in no other product on the market.

After manufacturing their first pint in early 2019, Nightfood ice cream is rolling out nationally. The brand has recently announced distribution in four of the top fifty supermarkets in the United States. These include over 100 locations of the Meijer supermarket chain throughout the Midwest, with concentration in the metropolitan areas of Chicago, Detroit, Indianapolis, Columbus, and Milwaukee, as well as Lowes Foods, with 78 stores in the Carolinas and Virginia.

To enter the Nightfood® Ice Cream Giveaway, where the Company is giving away a one-year supply of Nightfood ice cream, plus a brand-new freezer to store it in, visit http://nightfood.com

MJ Munchies, Inc. was formed in 2018 as a new, wholly owned subsidiary of Nightfood Holdings, Inc. to capitalize on legally compliant opportunities in the CBD and marijuana edibles and related spaces. The Company intends to market some of these new products under the brand name “Half-Baked”, for which they’ve successfully secured trademark rights.

Questions can be directed to [email protected]

This current press release contains "forward-looking statements," as that term is defined in Section 27A of the United States Securities Act of 1933 and Section 21E of the Securities Exchange Act of 1934. Statements in this press release which are not purely historical are forward-looking statements and include any statements regarding beliefs, plans, expectations or intentions regarding the future, including but not limited to, any products sold or cash flow from operations.

Actual results could differ from those projected in any forward-looking statements due to numerous factors. Such factors include, among others, the inherent uncertainties associated with distribution and difficulties associated with obtaining financing on acceptable terms. These forward-looking statements are made as of the date of this news release, and we assume no obligation to update the forward-looking statements, or to update the reasons why actual results could differ from those projected in the forward-looking statements. Although we believe that the beliefs, plans, expectations and intentions contained in this press release are reasonable, there can be no assurance that such beliefs, plans, expectations or intentions will prove to be accurate. Investors should consult all of the information set forth herein and should also refer to the risk factors disclosure outlined in our most recent annual report for our last fiscal year, our quarterly reports, and other periodic reports filed from time-to-time with the Securities and Exchange Commission.