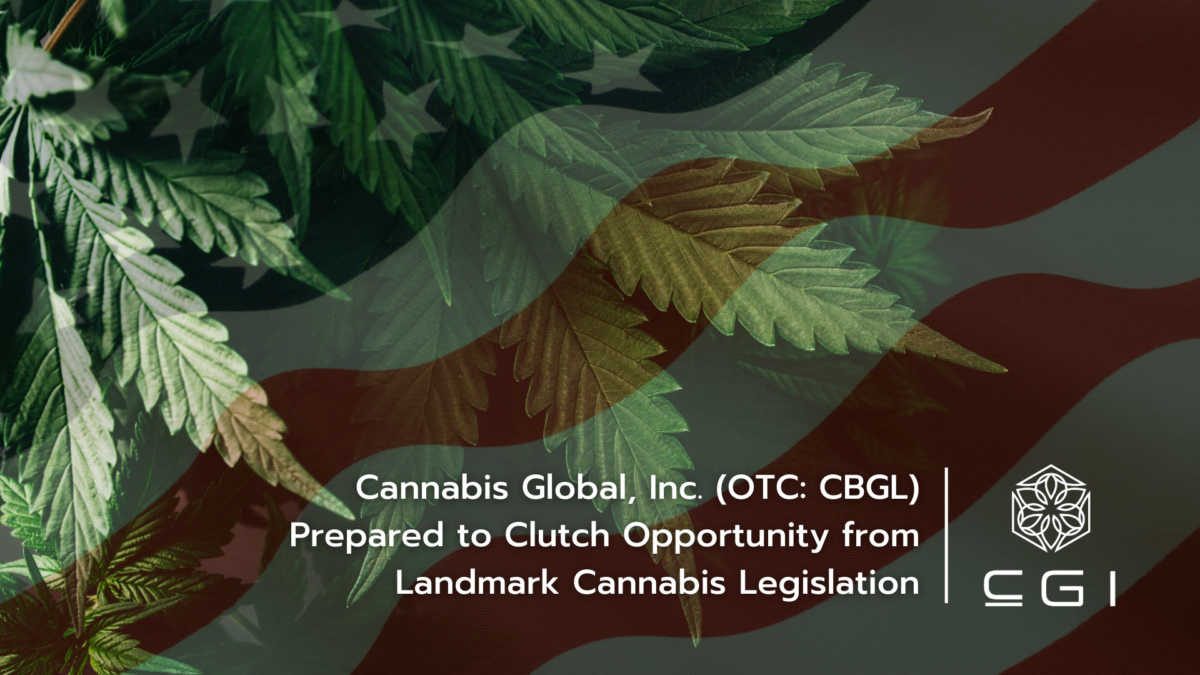 The U.S. House of Representatives Friday voted to decriminalize marijuana on a federal level. Though the Marijuana Opportunity Expungement Act (MORE Act) is expected to hit a snag in the Senate, its passage through the House represents a massive step toward cannabis reform, nonetheless. The bill is one of two pieces of legislation that cannabis companies are watching closely, and the prudent ones like Cannabis Global Inc. have long-been in preparation mode.

The MORE Act, which passed 220-204, would remove marijuana as a scheduled substance on the federal level – bringing it to par with the majority of U.S. states – and allow for expungement of some prior cannabis convictions. It would also impose an 8% federal excise tax on marijuana products. To-date, 36 states and Washington D.C. have legalized medical marijuana and 19 states and Washington D.C. have decriminalized recreational use for adults. Though the MORE Act is unlikely to secure the 60 votes it needs to pass the Senate, it generates traction for the Secure and Fair Enforcement Banking Act (SAFE Act) headed to Congress later this year.

The SAFE Act would prohibit federal banking regulators from penalizing banks that work with cannabis businesses legalized by states – this would give cannabis companies unprecedented access to basic financing options such as loans and capital raising. This is an astounding opportunity for cannabis-related businesses that are paying attention to the momentum.

Cannabis Global CEO Arman Tabatabaei appears to adhere to this mindset, whether he is familiar with Zig’s declaration or not, and has set the company on a flight path primed for opportunity.

In recent months, Cannabis Global invested in fresh marketing strategies for the launch of new products, driving substantial increases in sales of cannabis flower to California licensed dispensaries and revenues, as well as for customer orders of edibles and rosin-infused cannabis pre-rolls.

In a March 2022 press release, Tabatabaei attributed successful planning and the strength of its supply chain to roll-through product sellouts to meet customer demand. “We exited the February quarter with strong inventory levels of very high-quality products and with demands from our key retailers strengthening, we believe our growth rate is sustainable,” he said. “We are clearly realizing a renewal in growth at Cannabis Global as a result of several initiatives we put forth into the marketplace early this year. With strong inventory levels of very high-quality cannabis flower ready for shipment, about a dozen of new customers gained during the most recently completed quarter, and several new products in various stages of production for shipment over the coming few weeks, we are very positive about the future of Cannabis Global and our majority-owned subsidiaries.”

The company also executed on a debt restructuring plan to eliminate shorter terms notes to prepare for expected product demand stemming from its joint-venture agreement with a successful branding and marketing group.

“The recent payoff of the shorter duration notes via replacement of notes with longer durations will, for the time being, meaningfully reduce the number of conversions from debt to common shares,” Tabatabaei stated. “This comes at an opportune time while we are increasing our demands for working capital to fulfill the large increase of orders we are experiencing and as we begin to launch new classes of cannabis products via our recently announced agreement with Caliwanna.”

As the MORE and SAFE Acts tick forward, Cannabis Global is laying the framework for an advantageous position to grasp opportunity, whether the bills pass or not.

“Our company is beginning to gain traction, which is clearly being seen in the growth of our revenues across multiple sectors,” said Tabatabaei. “We expect the growth patterns we experienced late last year to continue. This revenue growth is being driven by new products entering the market, an increase in our distribution efforts, and the acquisition of numerous new retail dispensary customers throughout California. We expect these trends to not only continue, but to likely accelerate.”