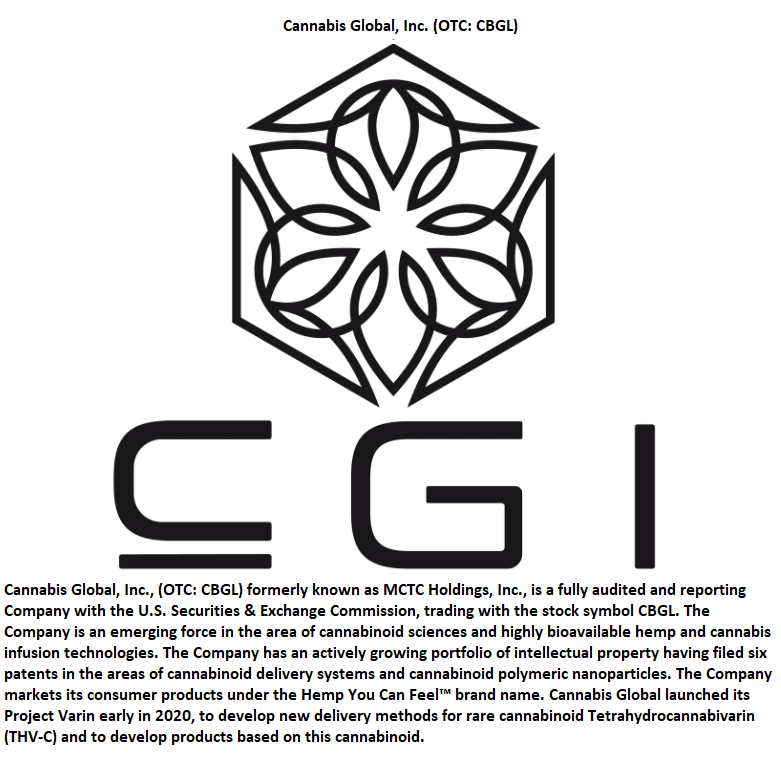 The cannabis industry didn’t achieve the gains its investors desired over the last year or so, but the mood appears increasingly optimistic after the inauguration of United States President Joe Biden. For Cannabis Global Inc. (OTC:CBGL) and other cannabis operators, appointments made by the Biden Administration create a wealth of new possibilities.

The top picks for the U.S. Department of Health and Human Services (HHS), for example, have a history of supporting marijuana legalization programs. This has already resulted in optimism among the investment community since the ultimate aim of most companies in the cannabis marketplace is the federal legalization of marijuana. With the new administration, there is hope this may take place.

Dr. Rachel Levine, selected as the assistant secretary at the HHS, has a track record of lending her support to the industry. The American Trade Association of Cannabis and Hemp commends Levine, calling her a “trailblazer” instrumental in guiding the medical marijuana program in Pennsylvania.

California Attorney General Xavier Beccera, nominated last year by then President-Elect Biden, is also a vocal supporter of the marijuana industry. In 2017, Beccera vowed that he would protect California’s cannabis industry from federal intervention under the Trump Administration.

These appointments suggest that things could be far more favorable for the marijuana industry once Dr. Levine, Beccera, and other nominations take their posts.

This brings us back to Cannabis Global, which, in recent times, has steadily become a recognizable name in the cannabis industry.

In December 2020, Cannabis Global CEO Arman Tabatabaei spoke about the positive vote in the House of Representatives with regards to the Marijuana Opportunity, Reinvestment, and Expungement Act (MORE Act). He stated that Cannabis Global has significant interests in the industry, considering the company owns as many as 650 million shares in the Marijuana Company of America (OTC: MCOA).

A nationwide opening of the marijuana market will benefit Cannabis Global, which has also acquired the national intellectual property for its cannabis transport system, the Comply Bag, and has several patent-pending infusion technologies in the pipeline.

Last week, the company announced its financial results for the quarter ended Nov. 30, 2020, reporting that the value of its assets grew to $2.5 million (38% sequential growth), primarily due to the investments it made in domestic and international cannabis operations such as MCOA.

One of the most important things to point out is Cannabis Global’s national focus, meaning that any kind of positive federal legislation could be highly beneficial to the company’s strategies.

Democratic control of the Senate further adds a positive among the hierarchies of Cannabis Global and strategic partner MCOA.

The companies issued a joint statement that due to the present political environment, there is a possibility the MORE Act will be passed. If that happens, marijuana will no longer be a federally controlled substance. Investors should consider keeping a close eye on these developments and other nominations as the Biden Administration takes shape.