MDCL: Are the Stars Aligned for this Company? 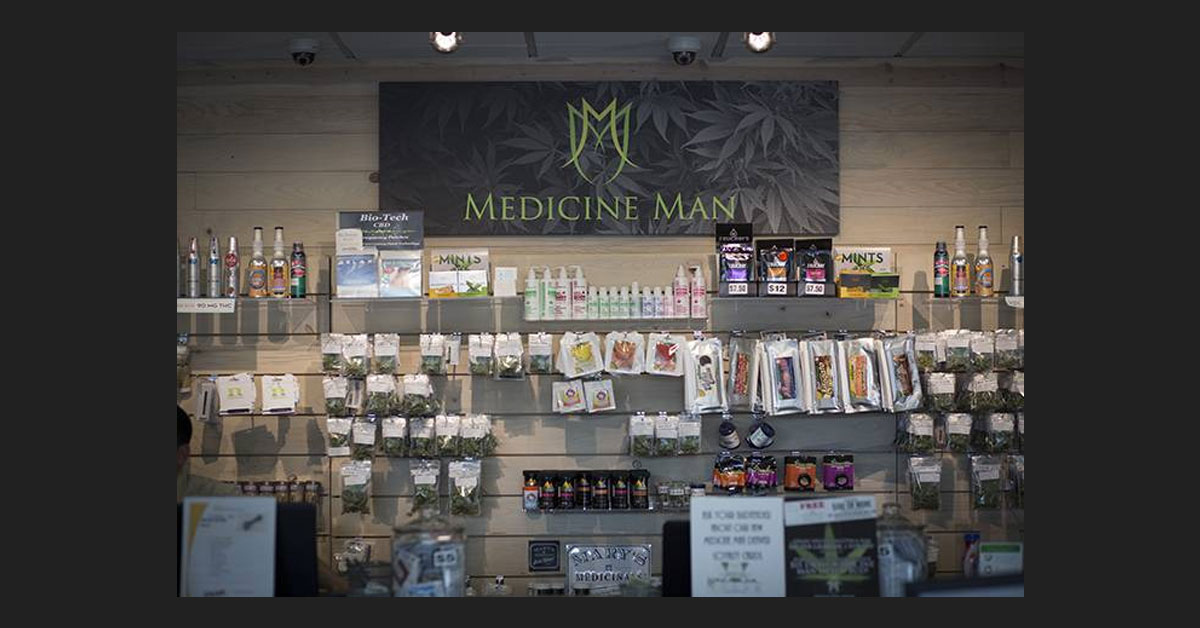 Source: From our friends at The OTC Reporter

If you’ve been burned by the big green cultivators this year, I get where you’re coming from. That’s why next-generation “green gold rush” stocks like Medicine Man Technologies Inc. (OTC: MDCL) are pinging the investor radar now.

After all, the companies that built sprawling greenhouses in places like Canada are growing one of the hottest agricultural commodities around, and that’s theoretically a good thing. But when too many people got the same great idea… at the same time… the commodity math gets UGLY.

Yeah, this is still a $12 billion retail business booming 35-40% a year. Investors who crave growth can reap enormous rewards playing that demand curve. People are making money in this space hand over fist.

But retail is the key word there. MDCL is consolidating Colorado store-level operations by the handful, rolling up tens of millions of revenue within subsidiaries in the process. Meanwhile the big growers are so eager to grab their piece of that huge-and-exploding market (and show their shareholders the revenue) that the wholesale price per ounce is going DOWN.

Great for retailers who sell at a government-regulated price because they can source raw product cheaper. NOT great for the big growers chasing each other down the hole of commodity economics.

So that’s why Big Green shareholders haven’t had fun:

That’s why it’s crucial to keep them separate from the retail stocks. There aren’t a lot of pure plays and they aren’t billion-dollar behemoths . . . but the Big Growers in pain has turned into a huge year so far for companies that keep their eyes on the prize rolling up those consumer-level opportunities. You know, where the money goes every day? 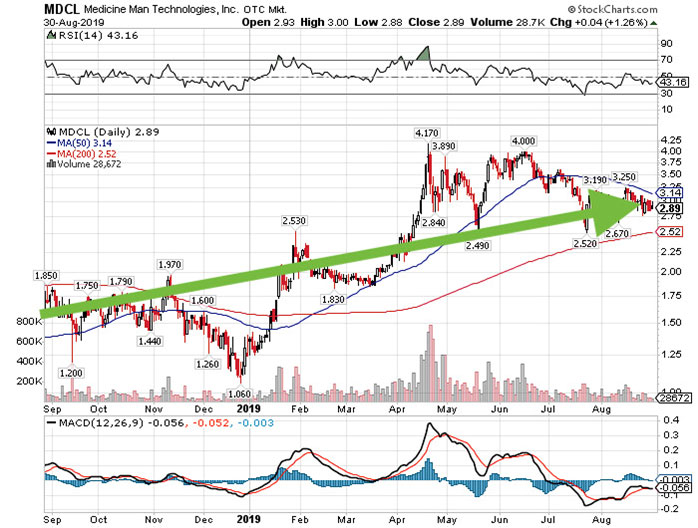 That’s easily a 60% YTD gain for MDCL shareholders who saw the way the industry wind was blowing back in January. And at the peak, this stock has easily been a double-the-money story.

And that’s just the last eight months talking. Later on I’ll show you a longer-term chart to demonstrate that this is a lot more than a fleeting flurry. MDCL is on a steep ramp to glory, a bona fide glory road. Let Big Green suffer. This chart still points UP.

Of course down here around $3 a share and $100 million in market cap, the ride looks closer to the start than the final destination. A lot of people have heard of Aurora or Canopy or Tilray but don’t know Medicine Man from a brand of rolling paper. As the word spreads, those that want a piece of the action can still get in early.

This isn’t a $5 billion monster like those stocks. If MDCL reaches that level, shareholders will cheer. Even if it hits 1/2, 1/10, 1/20 of that scale, this is a MONSTER play.

But what’s MDCL all about? Happy you asked because that’s where the opportunity and the dynamism are all about… the steak and the sizzle, if you want to think about it in those terms.

Medicine Man Technologies started as a consultancy and under the “Medicine Man” subsidiary evolved into as close as it gets to a pure play on Colorado “green” retail. They don’t call Denver the Mile High City for nothing. If this is a $12 billion business around the nation, Colorado accounts for $6 billion of that total market . . . so this is one of the HOTTEST jurisdictions around.

Colorado is big business, with more people than 60 countries including New Zealand, Finland, Norway and so on. And since 2014, it’s become famous for getting friendly with one commodity in particular. You know the one. The state keeps careful records and about 15% of its 5.6 million population identifies as a consumer now, spending about $1.5 billion last year alone.

But until a few months ago the Mile High state of mind was only available to private investors. Public companies were locked out. Denver didn’t want outside money and expertise horning in on the local boom. Then the rules changed and the borders opened to big wheels like the guys at MDCL.

The funny story about MDCL is that they were doing nicely working with Colorado growers and retailers as consultants, always one step removed from the real action. Overall revenue soared 168% last year and is already adding another 24% to that base here in 2019.

They’re going from record to record. Cash is flowing and liquid reserves have doubled. No wonder the stock has run rings around the big boys!

However, MDCL management just wasn’t satisfied taking a consultant’s cut. They knew the business inside and out. People on their team literally wrote the book on how to operate in this space. They were raking in millions helping entrepreneurs around the country design better grow operations, run tighter retail stores and bring scientific reliability to what’s otherwise a wild-and-woolly landscape.

It was great. But they were still eager to get more involved in the plant itself where the source of all wealth in this business derives. They literally wanted to get their hands dirty, especially in Colorado where the mountains shut outsiders out. I can’t argue with them.

When the barriers came down, MDCL (the parent company) went in fast and furious, buying the state’s biggest sustainable grow operation (it’s also the biggest on the continent) and the associated retail / extraction businesses. The guy selling it is ambitious and near legendary in the industry.

He’s thrown numbers like $20 million in revenue around. That’s barely a scratch on the $1.5 billion Mile High opportunity, but it just shows you how fragmented the landscape is in this state when the largest “green gold” farm in America has only captured 1% market share so far.

MDCL isn’t putting him out to pasture either. He’s joining the board of directors and sharing his know-how to help take the company as a whole to the next level. After all, he knows Colorado. He’s already built a sprawling 36-acre operation there that complies to the state’s rigid regulations, where every sprout is electronically tagged and tracked from seed to sale.

Other people would probably have been happy to pause at that point and digest the acquisitions before moving on. MDCL, on the other hand, knows exactly what it wants. Days after closing the Colorado deal, they expanded into Colombia, which has the climate and space to have become famous in other commodities and is now emerging as a leading exporter of legal “green gold” products.

That transaction bought them a 271-acre farm and all the associated regulatory paperwork in exchange for about $5.4 million. Do the math. The Colorado operation was 1/7 the size and can ultimately support 1/7 the plants. Its visionary founder poured $10 million into it because he saw a path toward taking $20 million a year in revenue out of that ground.

Multiply his dream by 700% the acreage and MDCL (again, the parent company) may have made one of the great bargains of our generation. After all, the team is eager to bring new efficiencies and scientific methods to the Colombian side. They have decades of expertise and plenty of outlets here in the U.S., including their own retail presence and indoor cultivation.

That was practically a “model home” style proof of concept for them in the past, a way to prove that their consultants could actually walk the talk and back up the theories with operations that deliver real cash flow. But now it’s something more.

Colorado may still be closed to plants grown elsewhere, but extracts and pharmaceutical ingredients follow different standards. That’s where the next phase kicks in.

Then, there’s another extract maker. No details on revenue but Benzinga was impressed enough to write up the deal. Based on the comps from that other acquisition, management might have seen the chance to add another $3 million a year to the run rate. Bing, bang, BOOM!

Remember, extracts can source raw material from anywhere. By the time it gets its final packaging and hits store shelves, it’s a retail product, not an agricultural commodity. State by state, your job is just to ship the stuff out and collect the receipts.

I’m thinking the Colombian farm forms the basis of this business plan. There’s no need to race to the bottom on pricing because the plant matter goes straight into the retail products MDCL subsidiaries now produce. Vertically integrated. Capturing margins along the way. 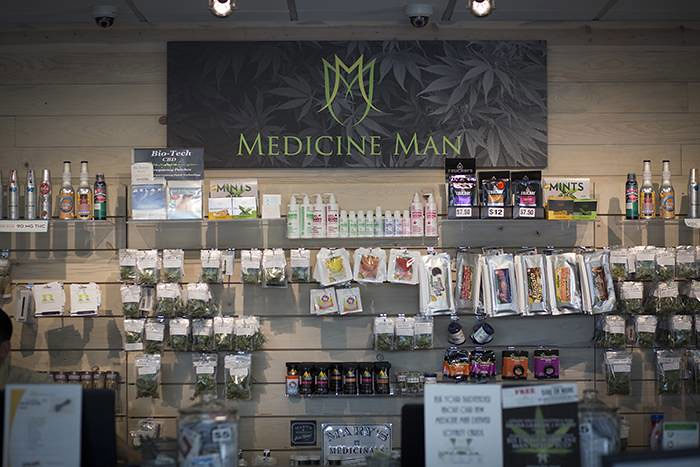 These products are already in 600 Colorado retail locations. Remember, MDCL knows Colorado retail. They helped a lot of these guys set up their stores early in the “green gold rush.”

And that’s the last piece of the puzzle I want to leave you with. If this is one of the hottest brick-and-mortar retail segments around, you can bet the movers and shakers of old retail are sniffing MDCL’s shadow wondering if they can get a taste.

The guy who used to be Chief Administrative Officer at Albertson’s had already committed $14 million of private equity to MDCL. He just kicked in enough cash to raise his stake another 50%.

This firm is no nonsense. They don’t look like the types who hear about a fad and let FOMO take over so they can keep up with the Bains and Carlyles and Goldman Sachs of the world. Check out the portfolio. It’s serious, buttoned down stuff with a clear revenue model: local banking, better charging systems for mobile devices and yeah, MDCL.

They didn’t put their $21 million in Big Green. This is where those smart guys (who know ground-level retail from the ground up) decided to play the boom.

And because they just increased their stake, they evidently see MUCH better days ahead for this stock in particular. Let the big growers drift. Forget them and their woes. This is where the real heat is… where it always WAS.

If the Dye Capital guys are right, MDCL is the heart of a dominant player of tomorrow in one of the most vibrant industries of today … in one of the oldest and most receptive jurisdictions… a pure Mile High play.

Here’s your chance to go where they go. You never know, with an industry expanding 35% a year, this may only be the opening act: 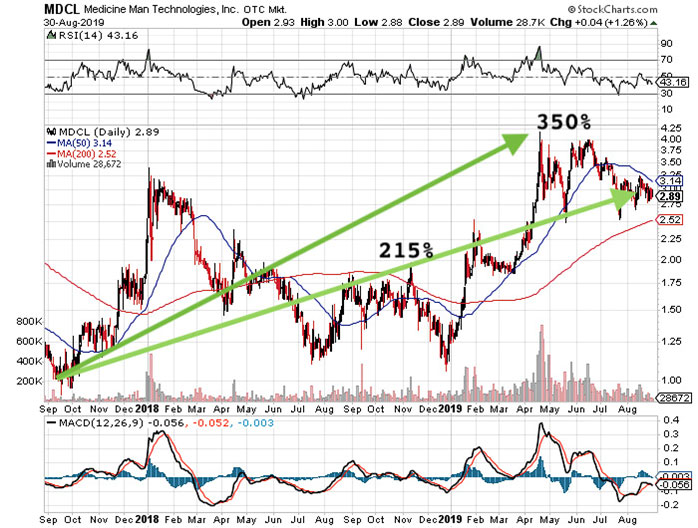